Tattoo removal with laser – this is the removal of artificial pigmentation of the skin due to the destruction of pigment by laser.

Since 2002, Vitaclinika specialists have been involved in the removal of tattoos, pigmentation, permanent makeup. Vitaclinika is the first center of laser medicine in Estonia. In our clinic tattoo removal is only carried out by certified medical practitioners who have undergone specific training. 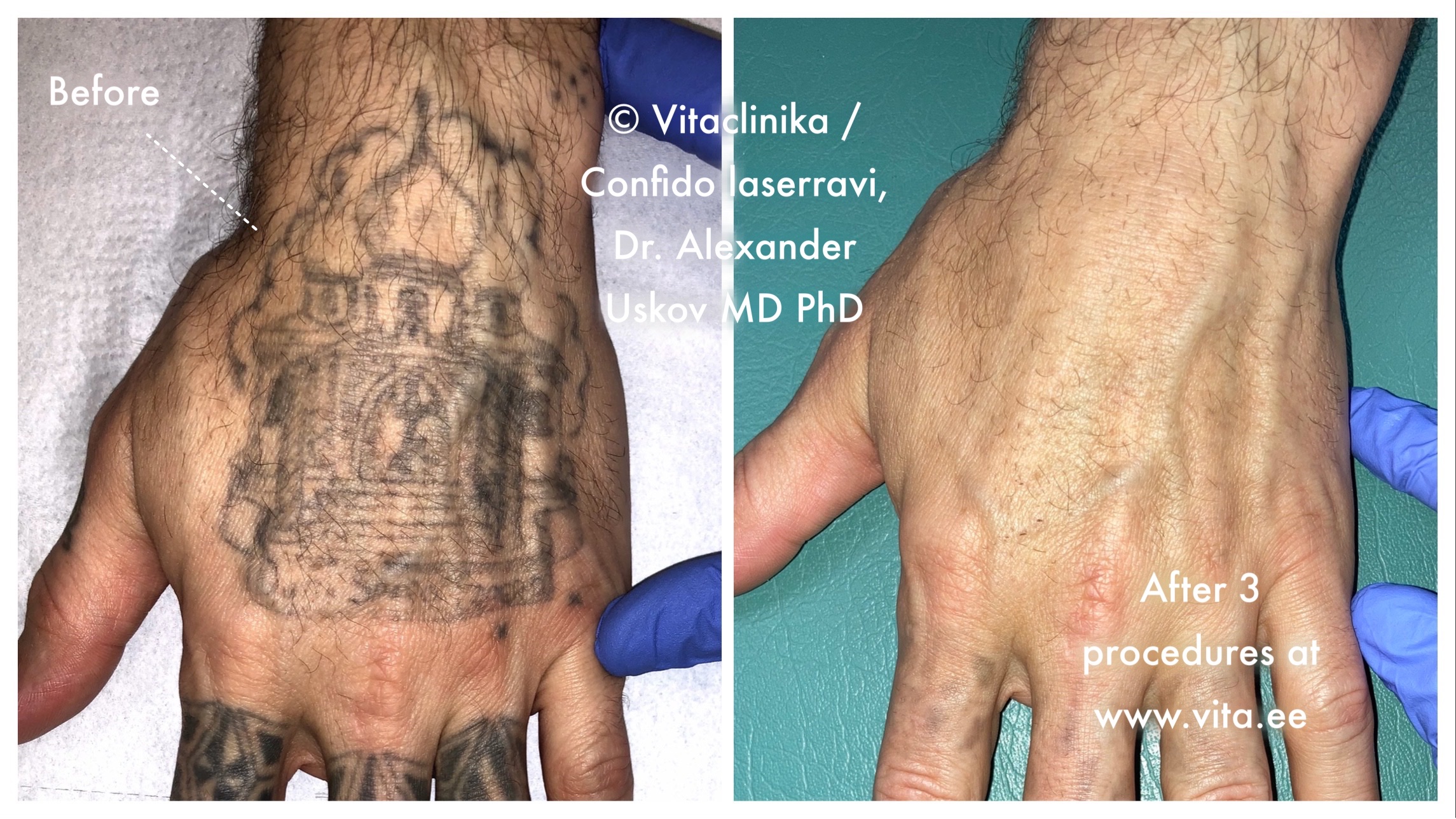 Photo of the result after 3 laser treatments

For the first time, the American physicist Theodore Maymann used the laser to remove the tattoo in the 1960s.
Since then, laser technology has been continuously improved and developed, which is a promising method for removing artificial and natural pigmentation on human skin.
At first, burns and scars were left on the skin with a tattoo laser. To remove tattoos, various lasers were tried: Ruby Laser, Argon Laser, CO2 Laser, Yttrium-Aluminum Gray Neodymium Laser, and so on, as long as the Q-switch Neodymium Laser arrives at the medical facility, which is now considered a gold standard for fast and safe removal of any tattoos and natural pigmentation. 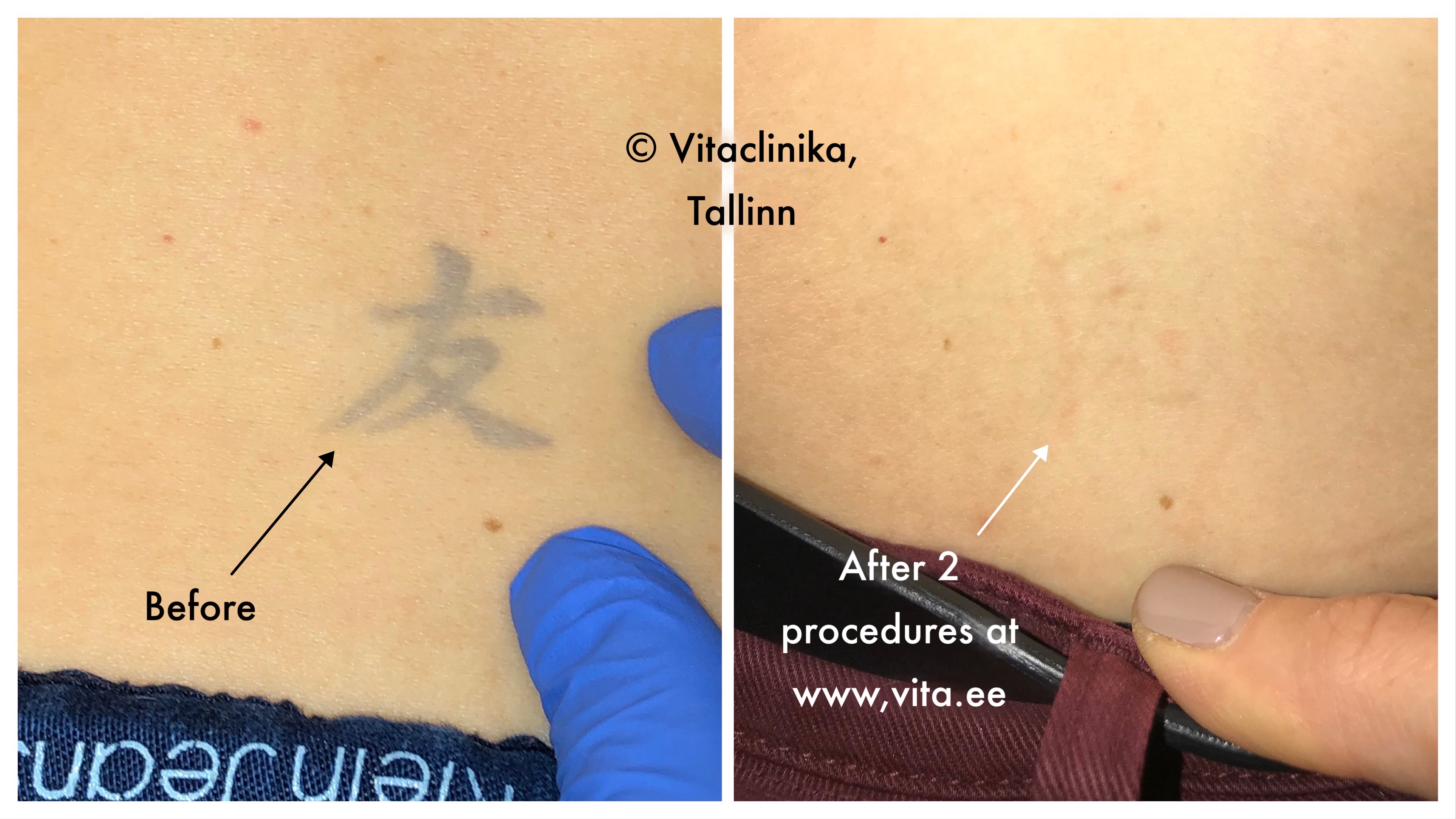 METHODS USED FOR REMOVE THE TATTOO

It would be wrong to think that the same removal methods should be used for all tattoos. It relates to both the nature of the pigment and its colour, depth, colouring matters used, as well as the patient’s sex, age, and state of health.
Only an experienced doctor, after studying and practising can determine which specific method or combination of methods is indicated for the best removal of the pigmentation of the particular patient.
Vitaclinika (Tallinn, Estonia) has several methods (or combinations of them) to remove tattoos and artificial pigment (for example, a lip or eyebrow):
1. A high-power Q-switch medical laser is the most commonly used method for laser tattoo removal in medical institutions. The powerful and very short nanoimpulse of different wavelengths allows you to work with any colour and practically any kind of deep pigment without damaging the skin.
2. The medical IPL Lumenis M22 is a particularly gentle technique for removing natural pigment, pine needles, pigment lobes, lentigas which are located in particularly delicate areas.
3. Microinjection methods for removing pigmentation.
4. Surgical removal of pigmentation using a cosmetic suture. This method is used in very rare cases.
In most cases, it is enough to remove tattoos and pigment from the 1st to the 2nd. the methodology and the 3rd-4th the method remains the Vitaclinika arsenal for rare occasions.

HOW TO REMOVE TATTOO WITH LASER

Laser removal of tattoos works on the basis of selective photothermolysis. Due to the strictly defined power and wavelength precision laser pulse, pigment particles are heated in the skin for a short time (a few nanoseconds) and as a result they break down into fine “dust”. This dust is a very small part of the pigment. Their small size allows the body’s lymphatic cells to easily grip them and remove them from the skin with natural lymph flow. With one procedure, not only the whole pigment, but part of it, decomposes. After about 1-2 months, the procedure will be repeated again.
It takes 6 or more procedures to completely remove the tattoos. 1-2 steps are enough to bleach the tattoo.

Before the procedure, the physician will explain in detail all the technical issues, provide the necessary recommendations, and answer the patient’s questions.
In Vitaclinika we remove only the tattoo with the appropriate equipment in the medical room.
Before the procedure, the doctor will perform an observation of the removal area. If necessary and according to indications, a cream anaesthetic for injection, but in most cases no additional anaesthetic is required. According to our patients, “making a tattoo is worse than removing it.”
A Vitaclinika uses a powerful Q-switch laser that has a diameter of up to 10 mm and a pulsating frequency of up to 10 Hz to remove tattoos, which allows you to remove tattoos in almost any size quickly and effectively (without loopholes).
The procedure is carried out using a cold air device, which increases comfort during removal and also significantly reduces the risk of negative complications. For this, Vitaclinika is equipped with a special apparatus that works in sync with laser.
The procedure lasts an average of 10 to 30 seconds. After the procedure, apply the cream to the treated area and cover it with a sterile bandage.
As a result of the use of medical devices, Vitaclinika will not experience severe enema, redness, skin inflammation or inflammation after the tattoo removal procedure. 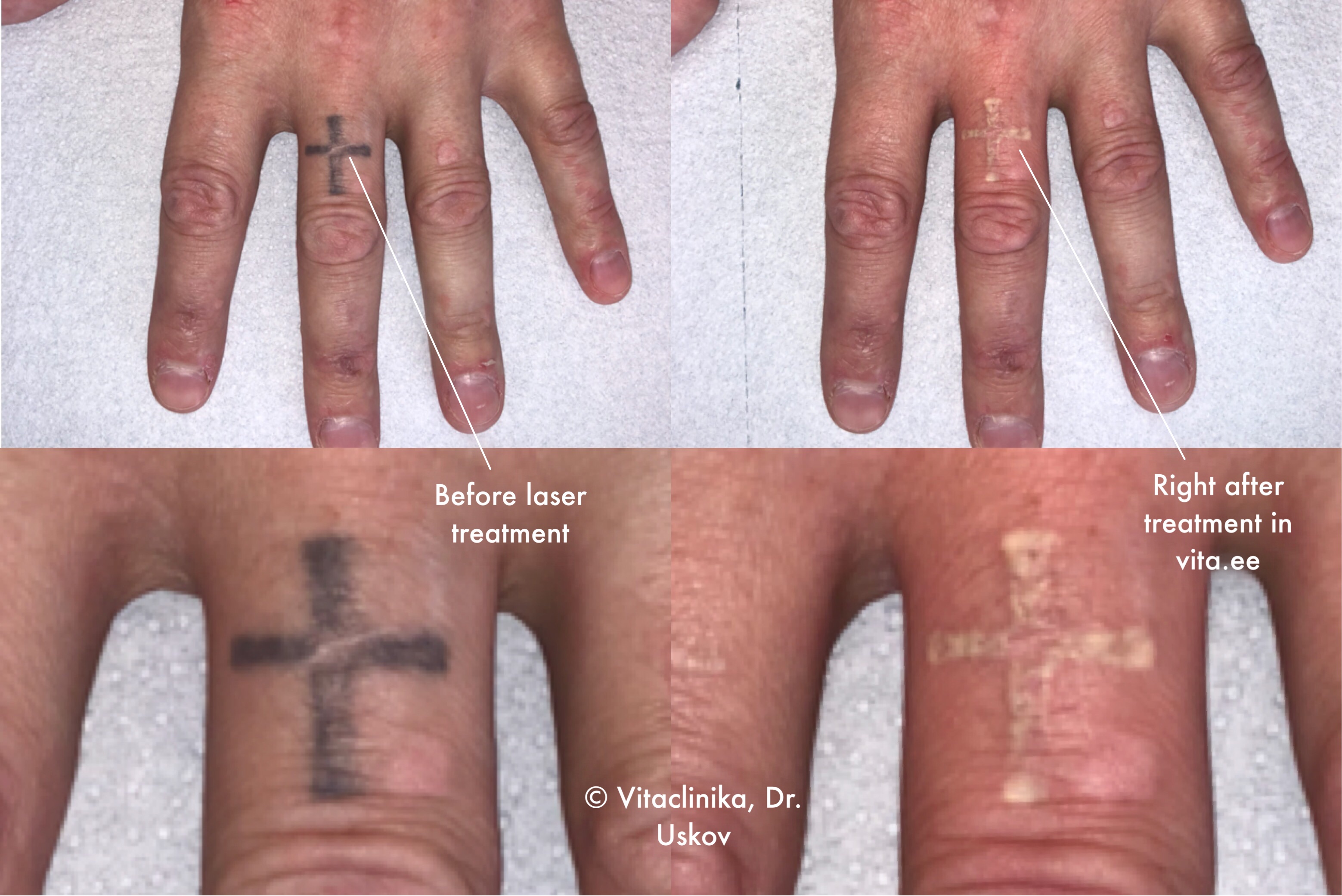 Photo: Tattoo before (on the left) and right after laser treatment.

BEFORE REMOVING TATTOO WITH LASER

1. Do not sunbathe for 4 weeks (including solarium)
2. Do not make cosmetic procedures to the tattoo area
3. Do not go to procedure hungry, recommended to rest
4. Tell your doctor if you are taking medicines, you are pregnant, you are breast-feeding or you are being treated by other doctor.

AFTER REMOVING TATTOO WITH LASER

WHAT YOU NEED TO KNOW ABOUT NON-PROFESSIONAL LASERS?

Removing tattoos with laser assumes that the specialist has skills and medical education. Sometimes patients tend to be cheaper or more responsive to the ad, and they just do not have enough skills, so they are doing a nonprofessional treatment.
It is important to know that the use of non-professional and cheap laser equipment has a risk of serious injuries and very unpleasant and irreversible consequences: blisters, infections and scarring.

The low-power and cheap “Chinese” laser equipment does not have enough power to destroy the pigment, so their power must be concentrated at a very small point to keep the radiation on the skin for a long time. Often, the radiation of such lasers is not clean. As a consequence, serious overheating and normal burns of the tissue will occur, with all its consequences.

Attention! On the Internet, there is an opinion that, after removing the tattoo, blistering on the skin and strong bark are the natural reaction of this procedure. This is not true. Strong burning and blistering after a tattoo removal procedure is not normal, but it shows a poorly performed procedure, in addition to direct exposure to scars and infections. That can and should be avoided.

1. According to statistics, it is desired to remove or modify every fifth tattoo. The average age of a patient removing a tattoo in Tallinn is 30 years.
2. The most common causes for tattoo removal are:
3. Aesthetically unsightly tattoo
4. The desire to change (cover) the tattoo
5. Personal life changes
6. Career or work-related requirements
7. Birth of children

TATTOO REMOVAL DIFFERENCES BETWEEN VITACLINIKA AND OTHER CLINICS

1. Procedures are performed only by medical staff
2. High-quality removal involves not just one, but several techniques

Photo: Tattoo before (on the left) and after 1 laser treatment 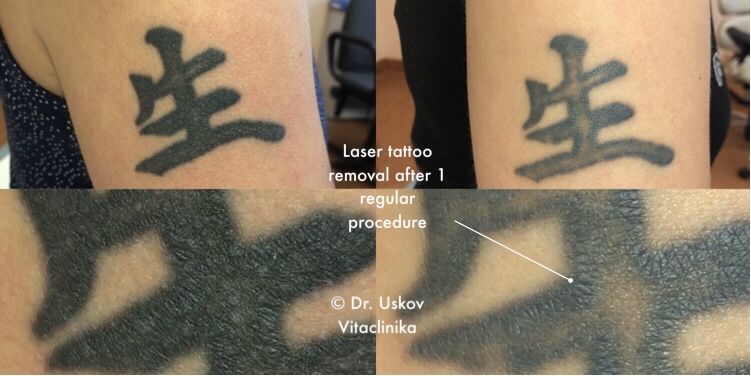 Photo: Tattoo before (on the left) and after 5 laser treatments

IS IT POSSIBLE TO REMOVE TATTOO DURING SUMMER? 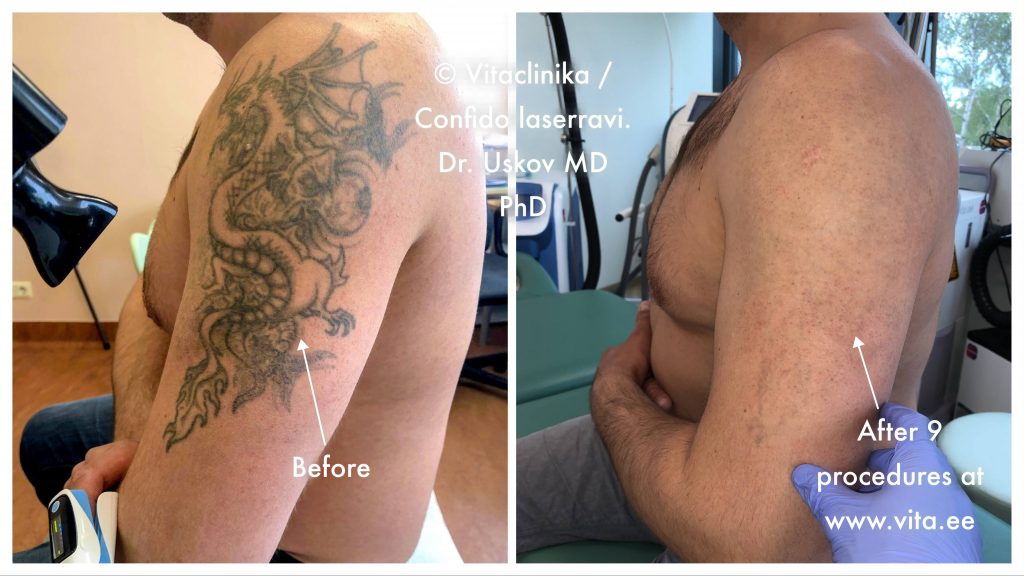 The answer is yes, maybe it’s proven and safe at the medical clinic. Many non-specialists consider that tattoo removal is contraindicated during the summer because of the risk of post-exposure pigmentation or sunburn.

In fact, the removal of tattoos in the 532 nm wavelength during the summer is indeed contraindicated, but not in all patients, but only in Fitzpatrick’s classification for patients with 4 and 5 dermotype. 1064 nm is contraindicated in patients with dermatopype 5. This is due to the fact that the melanocytic layer of the epidermis can prevent rapid penetration of the pigment in the dermis in these patients.

In other words, for statistically average European (type 1, 2 and 3 according to Fitzpatrick), laser tattoos are not contracted during the summer months. For simple measures to protect the skin after the procedure during the summer period, the doctor will give advise depending on the type of procedure and the location of the tattoo.

The answer is yes and this is proven. In rare cases, the removal of the ink, the pigment depth and the properties of the patient may be difficult.
The most easily and quickly you can completely remove black tattoos made from an amateurish look, not in a very large area. 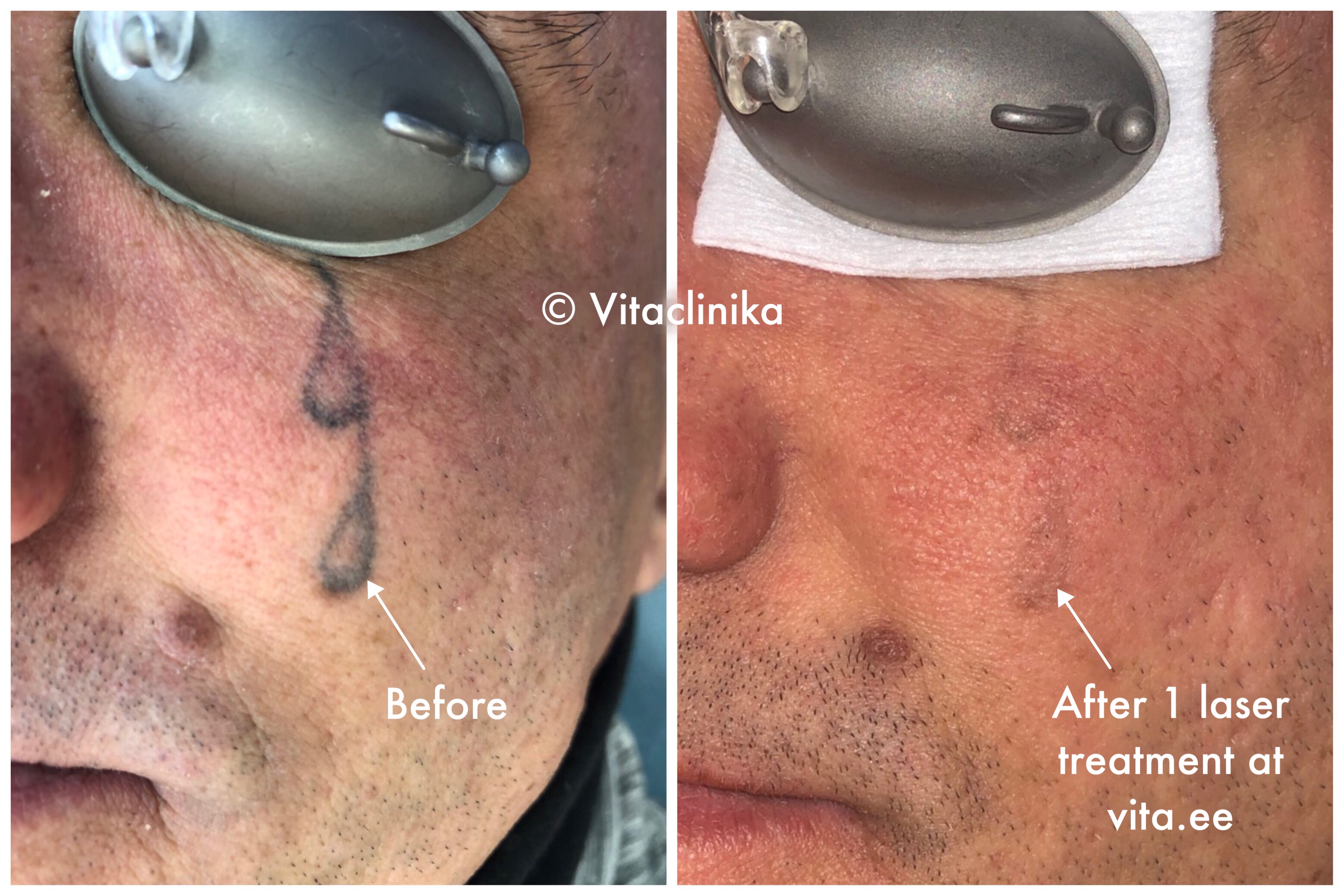 Removing coloured tattoos may take longer than removing a simple black tattoo. In very rare cases, it may be difficult to remove certain colours when removing inadequate ink. This is mainly due to the fact that different wavelengths are used to remove different colours, which increases the number of required procedures.

Photo: Colour tattoo before (on the left) and after 1 laser treatment

Technically, there is no difference between removing tattoos from the lips and eyebrows, and other parts of the body. Particular features of laser removal are the permanent colours of special pigments that, in rare cases, are resistant to laser radiation, as well as the specificity of working with eyebrows. Many Vitaclinika patients report that some time after eyebrow tattoo removal, the brow counts grow even better than before the procedure. 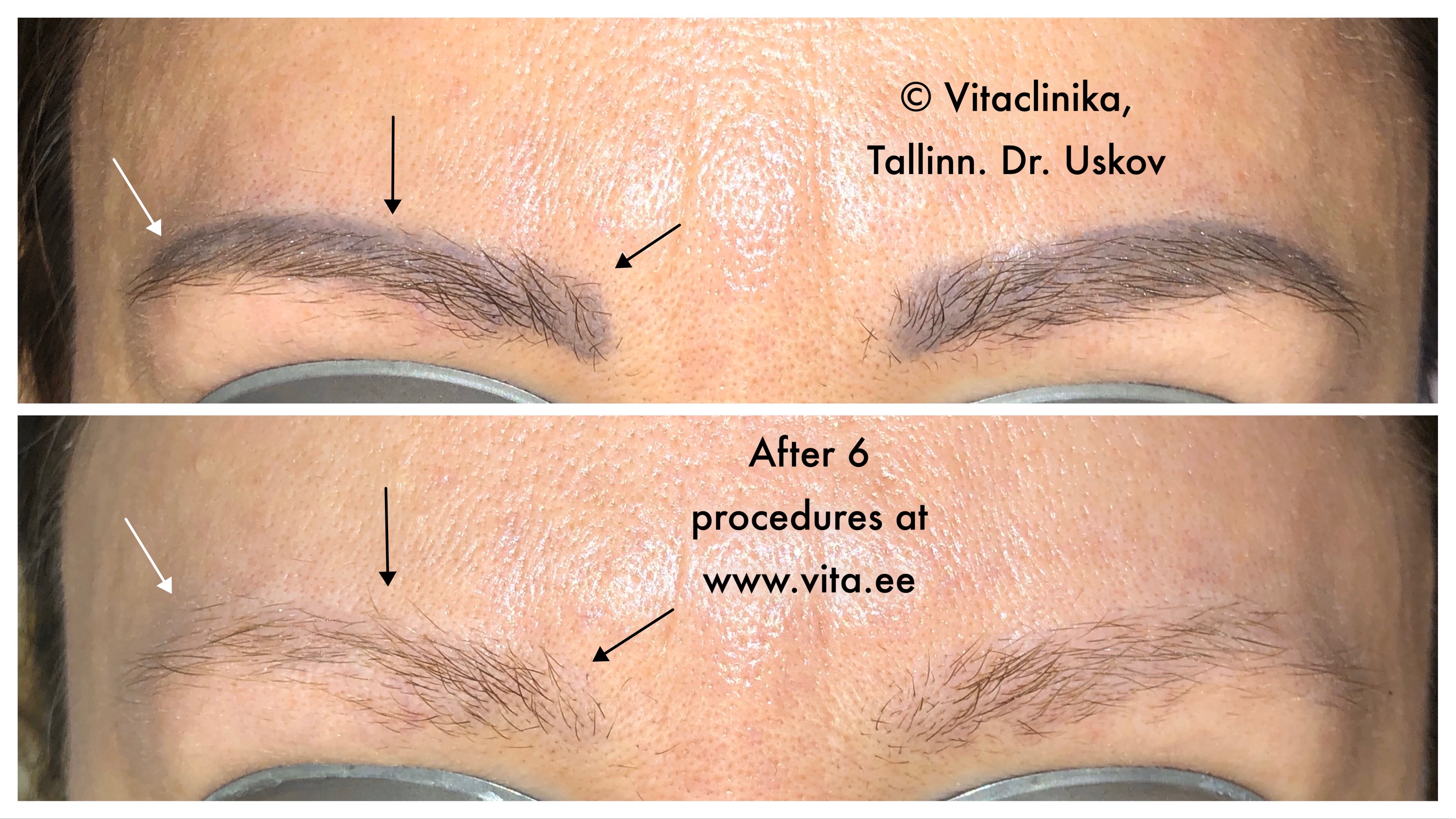 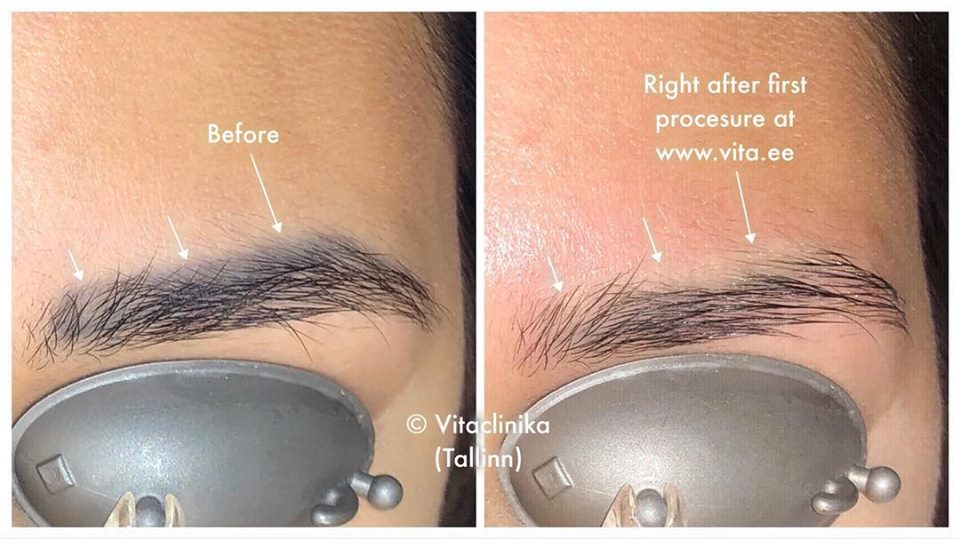