As a rule, dark spots on skin are not too annoying in early childhood, and do not threaten our health. Over time, however lovely freckles may become a serious aesthetic problem for adult women or young person.

In addition, in the case of a human predisposition to increased pigmentation ageing of our body can be “decorated” with very unpleasant spots, emerging in the field of skin injury or sunburn. Aesthetic inconvenience of pigmentation due to the fact that often dark spots are located in open areas, forcing the person to abandon revealing clothing, swimsuits, dresses with neckline or open back.

Pigment (called melanin) is located in special cells (melanocytes) directly in the skin, so “dissolve” or “wash” the pigment with chemical cosmetics, is simply impossible. Nowadays, thanks to the development of advanced medical laser and IPL-equipment, it is possible to fully deal with pigmentation and remove age spots permanently.
Pigment spots removal video:

From where the ageing spots occur?

As we mentioned above, the dark spots are uneven accumulation of pigment melanin contained in skin cells (melanocytes).

The reason of such uneven distribution melanocytes are usually physical skin traumas, burns (both solar and thermal or chemical), disorders or natural changes in hormonal balance (e.g., pregnancy), age (age spots), use of certain medications unsuccessful beauty treatments and some other reasons.

This pigmentation may occur immediately after exposure to the skin, sometime later, reaching six months or more. For this reason, some patients seeking Vitaclinika to remove pigmentation, and sometimes cannot even remember what kind of impact could cause the appearance of pigment spots in an unexpected place.

How to remove pigment spots?

As we now understand, safely remove age spots is possible only by acting directly on the pigment itself. Since the pigment is removed in the tap whole melanocytes and melanocytes located deep in the skin, then remove them from there is cosmetically impossible.

In Vitaclinika use laser pigment removal and pigmentation removal technique using IPL-modern equipment. Despite the large number of fundamental differences for physicians, these techniques are similar in that the pigment itself destroys minimally the surrounding tissue.

A qualified dermatologist on consultation should appoint the particular method of removing the pigment that is suitable to the patient. If there is any doubt, a dermatologist performs the necessary studies that would provide full security and safety procedures. The procedure is the treatment of pigment spots in Vitaclinika operated by exclusively certified surgeons.

How quickly pigmentation can be removed?

After the first procedure, dark spots disappear or significantly lighten. However, the rate of disappearance of the spot depends strongly on the individuality and the amount of pigment. At the same time to get rid of pigmentation may require multiple procedures.

Pigment spots removal (before and after):

Lentigo removal on face photo (before and after)

Pigment removal on cheeks photo (before and after)

Pigment removal on nose photo (before and after) 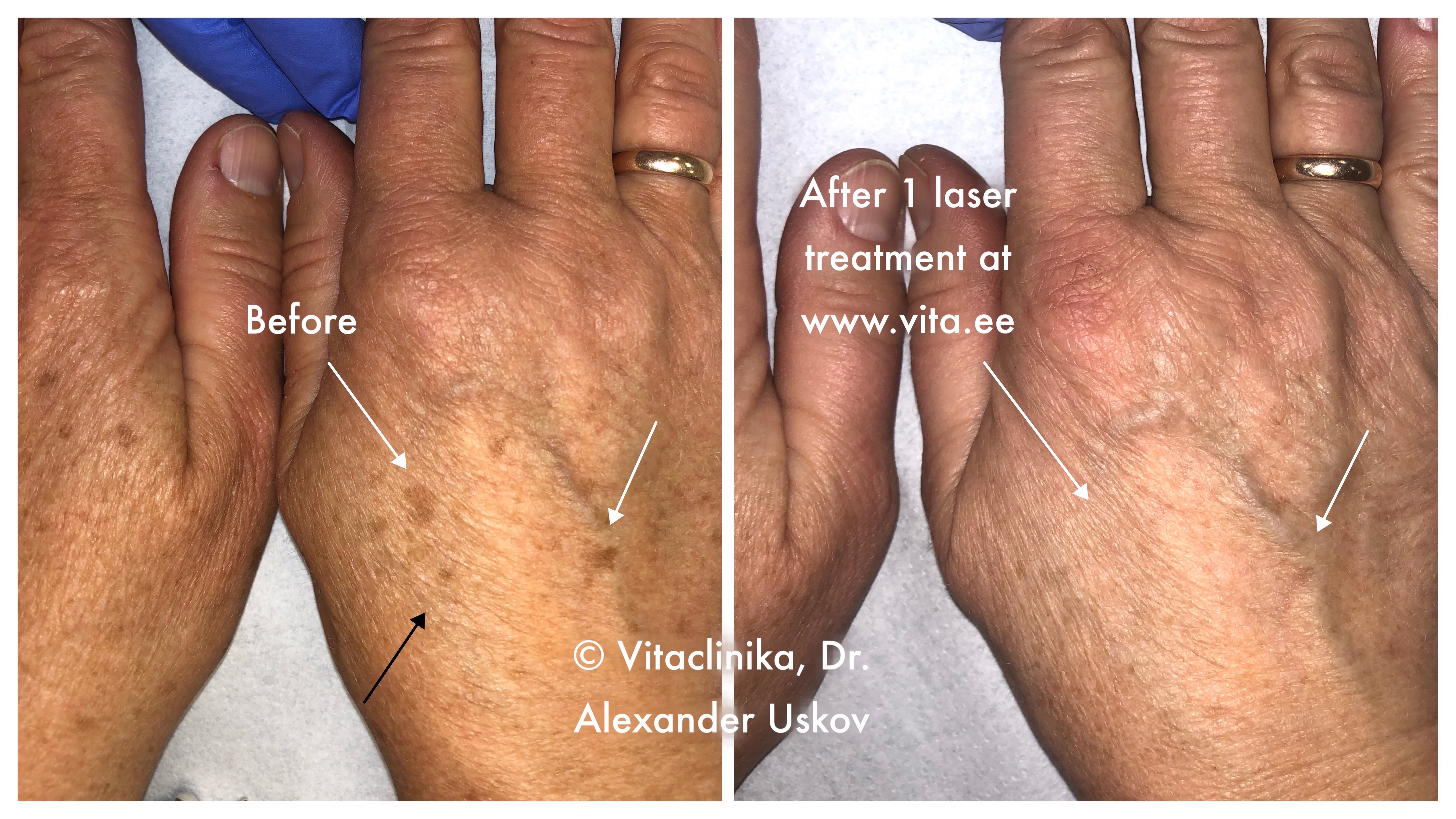 Pigment removal on hand (before and after)

Chronic diseases in the acute stage

The tendency to form keloids

Infectious diseases in the acute stage

Description how to remove a pigmentation in Vitaclinika

Vitaclinika is conveniently located in the center of Tallinn, the procedure is carried out in the comfortable treatment room. Depending on the depth of pigment, the procedure may take 10 to 60 minutes. The procedure for removing pigment is painless and does not require the use of special anesthesia. Perhaps feeling a little perceptible stinging. If necessary, the procedure will be repeated, as a rule, no sooner than 2-3 weeks after the first treatment.

– Exclusion of the solarium and sauna (from 2 weeks)