Capillaries are small blood vessels in the superficial layers of the skin, which can expand due to external or internal factors.
Enlarged blood vessels are a common problem. When they are well visible and disturb people from an aesthetic point of view, it’s time to think about removing capillaries with a laser. 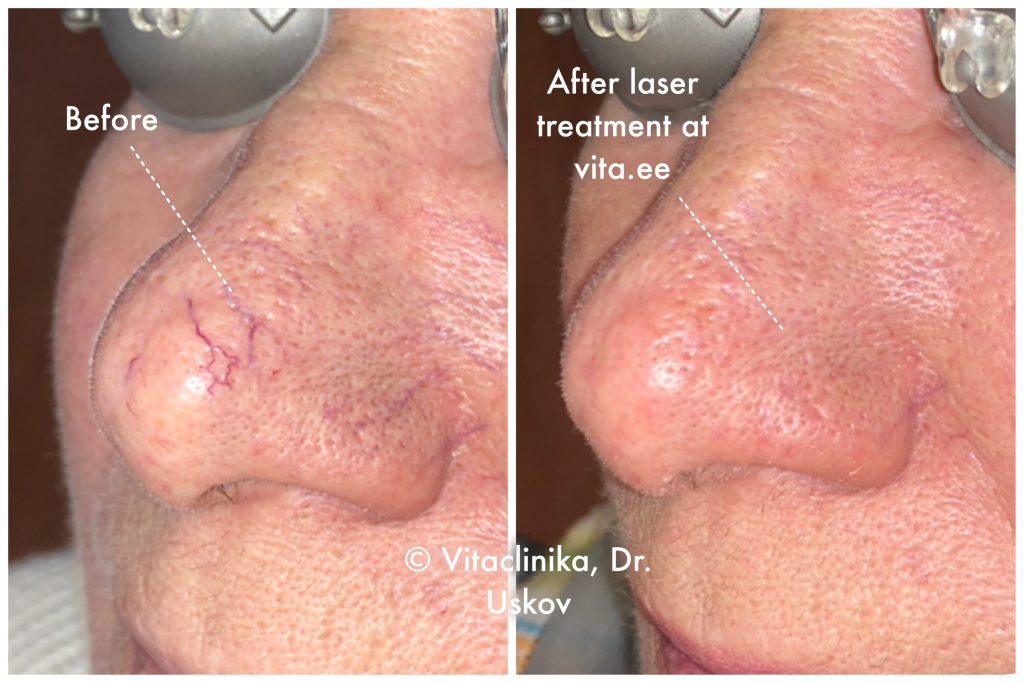 Rosacea removal:  before and after 1 laser removal procedure

Video – Rosacea removal:  before and after 2 IPL procedures

According to statistical data, laser procedures for the removal of capillaries are most commonly performed in children aged 1 to 10 years and in 30+ patients (especially women). Vitaclinika doing procedures to patients of all ages and both sexes.

Where do capillaries occur most often?

Typically, small, single red, blue or dark blue blood vessels can appear on the face (nose, cheeks), neck, and in fact, almost everywhere on the body.

Mostly, the generation of capillaries is due to the genetic features of the patient due to the body or face; secondly, other factors – the effect of heat and nutrition, hormonal status, and the specifics of working and sleep conditions.

How to remove expanded capillaries?

The most up-to-date method for removing unwanted capillaries is laser therapy. In our Tallinn clinic, in addition to removing capillaries in laser, other modern techniques are used: removal of the blood vessel through an IPL (Intensive Impulse Light) device and high frequency electrocagulation. Each method has its own advantages, indications and contraindications, but the optimal method for capillary removing according to indications is provided by Vitaclinika only. 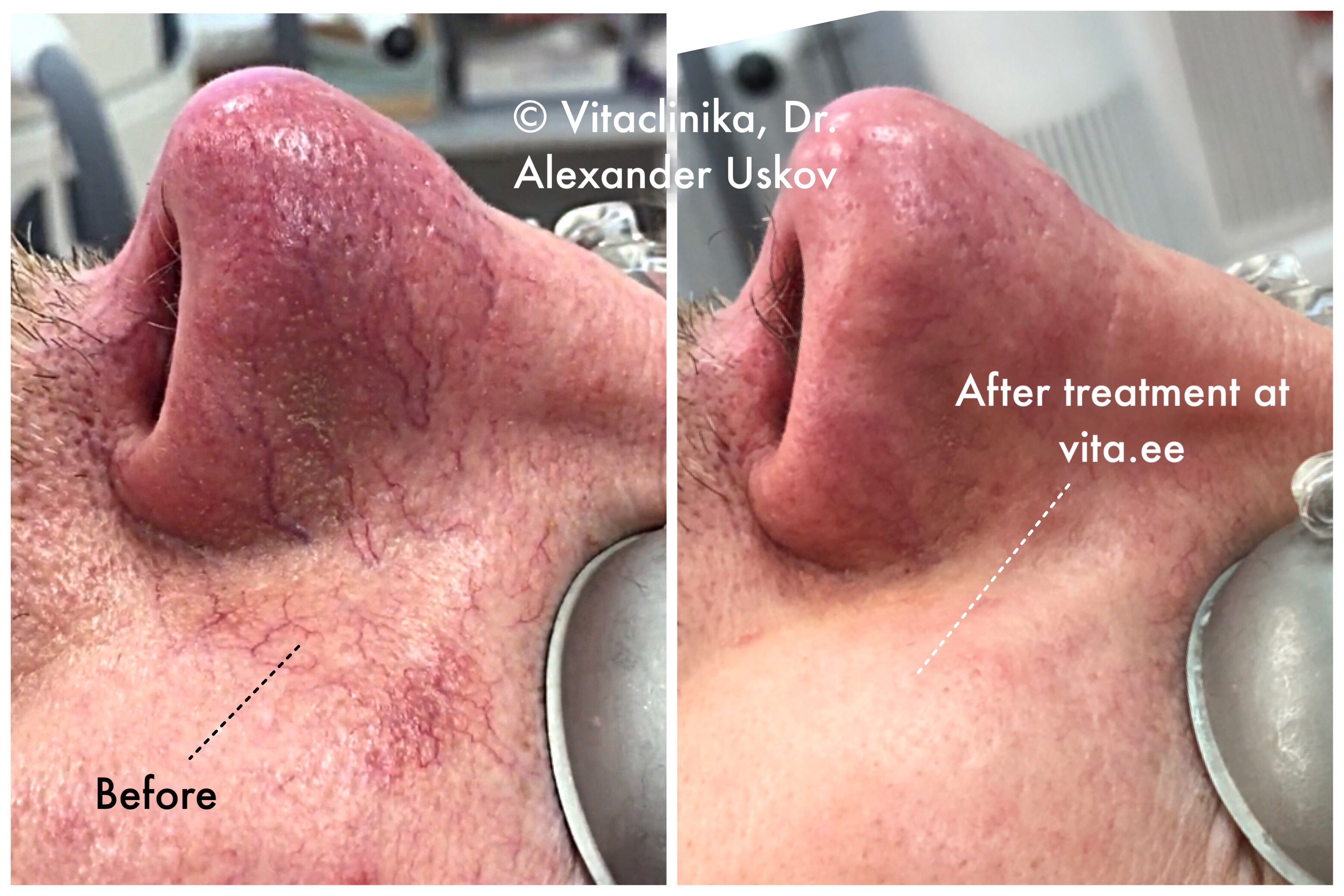 Why remove the capillaries in Vitaclinika in Tallinn?

It must be admitted that, due to the imperfection of the laws, anyone, even those who do not have basic medical education, can deal with the removal of capillaries in Estonia. It is sad and unfortunately attracts us to many patients who have complications after “cosmetic” procedures.

Before removing capillaries, consider not only the price, but also the risks that can arise in the case of a low-cost service.
1. In Tallinn Vitaclinika, capillaries are removed by ONLY CERTIFIED DOCTORS (not even nurses). Our doctors have completed training for the Lumenise equipment manufacturer, which allows the treatment to be carried out in strict compliance with the guidelines, so that an effective result is ensured.
2. Our doctors really have the largest experience in the field of laser medicine in Estonia (Vitaclinika has been working continuously since 2002).
3. If international expertise is required to remove capillary laser, our doctors have the opportunity to consult and involve the Lumen Expert Group in London.
4. To remove capillaries, we only use controlled quality components and devices, for example, a golden standard device in the Lumenis M22 for the removal of blood vessels.
5. In order to prevent the removal of capillaries in order to avoid the slightest complications, Vitaclinika uses auxiliary equipment, including cooling equipment, which means that customers have few complications.

How do you remove the capillaries by laser?

Preparation for the procedure

Two weeks before the procedure avoid:
– UV radiation (do not sunbathe or go to the solarium)
– peeling (skin peeling)
– other laser and photographic procedures.

Immediately after the procedure, natural redness and swelling in the skin can be seen where the capillaries were removed (it completely disappears for several hours, in rare cases it lasts for 24 hours).
After the procedure, the very sensitive skin can be slightly peeled or overlap with a thin, light crust. In very rare cases, small bruises or inflamed wool are possible, which quickly disappears naturally.
Within two weeks of the procedure it is necessary to avoid exposure to UV radiation (do not sunbathe or go to the solarium), sauna and severe physical effort.

When can you rate a result?

Usually, the patient can evaluate the final outcome on day 14 after the procedure. However, it must be kept in mind that the outcome of any medical procedure is individual and can not be accurately predicted.
Removable capillaries are completely soluble. However, it should be kept in mind that the capillary removal procedure does not allow stopping the aging process or preventing the formation of new capillaries.
Book on time by phone or on the Internet to remove capillaries by laser.